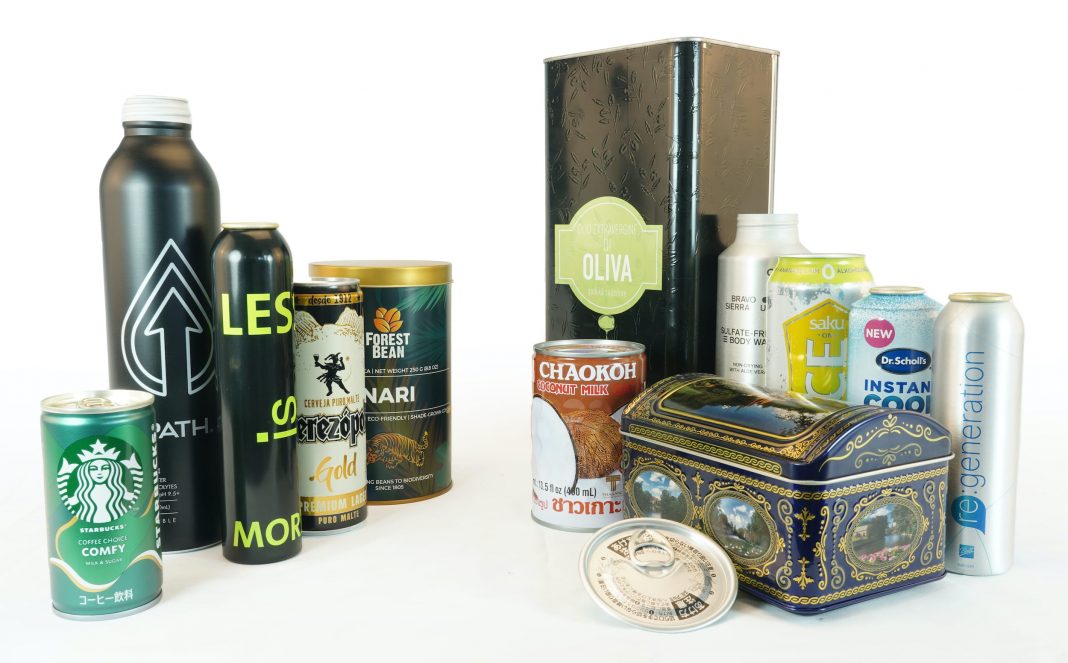 Like a motor race when a fraction of a second separates the first two cars as they pass the chequered flag, the difference in quality between runners-up and winners of The Canmaker Cans of the Year Awards was often barely perceptible.

Judges had their work cut out ranking entries that boasted new fabrication techniques, lightweighting and novel approaches to decoration.

As in past years, the drive for sustainability continued, with winning cans boasting up to 100% recycled content and other eco-friendly features.

Safe and sustainable
The standard in the Food Three-Piece category was so high that the judges agreed there had to be two runners-up. The entry from Crown Food Packaging in Thailand combined good looks with a thoughtful anti-counterfeiting design for its customer Theppadungporn Coconut Company (TCC), one of the largest Thai producers of coconut milk.

The popularity of TCC’s Chaokoh Coconut Milk had resulted in criminals selling fake products in cans bearing labels that mimicked the real thing. Crown employed a number of design techniques to thwart this. It gave the three-piece welded tinplate can a printed ‘upside-down’ end and replaced the traditional beading with Crown’s Quantum debossing technique to produce a distinctive pattern that is hard to copy.

Judges liked the “golf ball-like” texture produced by the debossing and were impressed by its other two benefits. The process enables material reduction of about 12% compared with straight-walled printed cans and offers a memorable look and feel for consumers when the can is displayed alongside competing brands.

Joining Crown in winning a joint silver award was Italy’s ASA Italia, which elevated the look of a five-litre can of edible oil beyond the everyday.

ASA Italia said the three-piece welded tinplate can was designed to reflect the quality of Italian olive oil. The

judges were delighted with the printing technique, in which the cans are coated with a varnish that protects the graphics and gives a premium, glossy appearance. “I love it when brands do something different for something so utilitarian,” one of the panel remarked.

Improving usability
Another clever design was demonstrated by Japan’s Toyo Seikan in the Ends, Caps and Closures category.

The canmaker developed an easy-open ring pull to be used on food cans. While such openings have been around for many years, some users find the method uncomfortable and have difficulty in getting their finger inside the ring-pull to secure the necessary grip to open the can.

Toyo Seikan’s design addresses the problems and the judges observed that an adaptation on the aluminium ring and indentation on the lid was “a clever design that makes the opening easier”.

The finger-fitting tab achieves two contradictory results. Angled upwards from the lid, space is created between the end’s surface, making it easier to grip the ring-pull and open the can. At the same time, the angle of the design prevents the ring-pull from being unintentionally caught, the can opening and its contents wasted.

Ensuring the integrity of the food within was also part of the consideration for India’s Nikita Containers when it made a tinplate can with slip lid for Forest Bean coffee beans.

The embossed three-piece welded can has a valve that keeps the beans fresh even if the can is repeatedly opened. The design isn’t only functional, the judges agreed – it is beautiful too.

As a result, the entry won two categories: gold in the Food Three-Piece category and silver in the Decoration and Print Quality division. Judges agreed Nikita Containers’ coffee tin is “stunning”, applauding the way the elegant green, gold and white colour scheme is set off with a high quality matte finish.

Fit for a king
A premium look was also on show in the winner of silver in Fancy Cans from Meister, whose ‘imperial’ metal chest was launched by the Brazilian company in February.

The chest features an arched hinged lid on a decorative lock-seam tinplate container with an unlevelled base. It took silver for the canmaker, which won bronze in the category in 2020 with a tinplate egg-shaped container.

Meister makes its imperial chest to hold gifts such as jewellery or confectionery. Decorated with European landscapes framed by embossed intertwined designs, the royal blue and gold palette emphasises the regal look of the chest. The judges agreed it was “very nicely done” and complemented by a lipped base.

Designing a beautiful container to house a gift makes sense, but it’s less common for aesthetic appeal to be integral in the packaging for products that treat common health complaints.

Judges agreed the US division of Canada- based Montebello Packaging went above and beyond expectations in its aerosol can for Dr Scholl’s athlete’s foot treatment spray.

The impact-extruded aluminium can took silver in the Aerosol Cans category with an entry that judges reckoned was in equal parts “smart and clever”.

The design was originally envisaged as a three-piece tinplate can, but Montebello retooled it to fit the contours and dimensions of an aerosol can. The canmaker used split- ink printing and created a dark blue screen that rises from the bottom of the can before fading at the midpoint.

The judges loved the colour graduation and how the word ‘COOL’ on the front was rendered in two-tone blue. Dry offset printing helped to create the light-blue speckled graphic at the top of the container. Judges also praised the host of effects achieved by Montebello, including the “elegant” transfer shoulder and the well-tooled lip lid.

New generation
The aerosol can sector provided another silver winner, this time in the Sustainability category. Ball Corporation won silver for the most environmentally-friendly aerosol can it has ever produced.

Called Re:generation, the impact-extruded aluminium aerosol can is said to have half the carbon footprint of a conventional aluminium container. Ball achieves this by combining its ReAl proprietary alloy with 50% recycled content and primary aluminium that is sourced from low-carbon sources powered by renewable energy.

Submitted by Ball Aerosol Packaging’s division in the Czech Republic, Re:generation is available worldwide. The judges were enthused by the way the design marries post-consumer recycled aluminium content with renewable energy.

The world’s largest canmaker said that because the cans are in production the company couldn’t divulge the names of interested customers, but said buyers come from across the personal care sector that make products such as hairspray, deodorant and hand sanitiser.

Ball wasn’t the only company to reduce the carbon impact of aerosol cans this year. Germany-based Tubex developed PURe,
a water-based overvarnish made from biodegradable natural inks. The aluminium aerosol can manufacturer said the way mineral oils are processed and used in varnishes generates carbon emissions. By developing PURe, which doesn’t include such oils or the need for labelling, Tubex said customers are able to use a process that is non-hazardous, devoid of heavy metals and help when they plan to trim their carbon emissions. An aerosol can coated with the PURe overvarnish won silver in the Prototype category.

“The water-based inks are a good touch,” agreed the judges, adding that “the overvarnish adds to its sustainability”.

Looking good
The Beverage Two-Piece category was an unsurprisingly hard-fought competition with some stellar entries. So high was the standard that the judges handed silver to two canmakers.

Much of the body of the 350ml can is a pale with a tactile varnish that provides a contrast to the gloss on the remaining area of the container. Judges commended the effect and the can’s “pleasing combination of colours”, which included a darker gold and black.

Poland-based Canpack (Brzesko) also won silver in the Beverage Two-Piece category with a 500ml can it makes for Saku on Ice, the non-alcoholic drink launched by Estonia-based Saku Brewery.

Judges liked the way Canpack used tactile effect inks to decorate the container with what looked like beads of condensation and convey what they called a “frosty varnish” that suggested how well Saku on Ice could quench a thirst.

The silver winner in the Beverage Three- Piece category was also lauded for the way its decoration achieves a combination of effects.

Japan’s Daiwa Can Company submitted a film-laminated three-piece welded tinplate can manufactured for Suntory Foods’ Starbucks canned coffee. Judges agreed “this product oozes quality” with a “lovely satin finish and a rich gloss logo” displayed on each container. In addition, because Daiwa makes the cans from sustainably-produced steel, it displays the EcoLeaf icon, one of Japan’s familiar sustainability ratings, on each container.

Sleek and strong
Sustainability was also a winning component for US-based CCL Container, which took silver in the Bottles category. Designed for PathWater, a US brand of purified water, CCL’s 740ml impact-extruded aluminium bottle is light, refillable and recyclable. The slim bottle sports a sharp matte design, which ties in well with the fresh and natural contents it carries.

Trivium Packaging in the US won the General Line silver award for its latest threaded-neck bottle. The 66mm-diameter impact-extruded aluminium bottle has a flat shoulder and was made for Bravo Sierra, the men’s personal care brand that deploys active US servicemen to test its products. Judges appreciated the “solid” well-made nature of the packaging for Bravo Sierra’s sulphate-free body wash, which they agreed should appeal to soldiers and civilians alike.

Reusable aluminium cups to be tried out at Queensland stadiums

New funding to promote ‘healthy’ sodas in UK and US

About
The Canmaker magazine is a monthly trade publication for the metal packaging industry and is available only to industry professionals. Coverage encompasses every sector of the business, from food and beverage to home care and automotive, and provides access to an unparalleled knowledge base.
Contact us: goldclub@canmaker.com
Find us on social media
© Copyright 2023 - Sayers Publishing Group Ltd