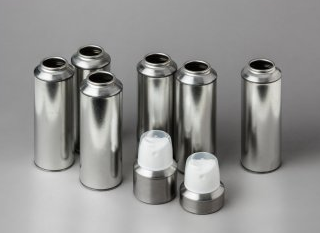 A cost-saving canmaking technique that uses lasers to assemble cans will be making its industry debut along with a number of new technologies at the Cannex & Fillex show being held in Denver, Colorado in the US next month.

The Laserdom system is initially being aimed at manufacturers of tinplate aerosol cans, which are normally assembled by double-seaming the tops and bottoms to the body.

By using lasers to weld the components together, the extra material used in the seams can be eliminated, offering claimed savings of up to 30 percent. And the can looks like a monobloc container.

The Laserdom system has been developed by Swiss company Caprosol AS whose chief executive Harry Brühlmeier describes it as modular. Each 1.1m-square Qube LD assembling machine has capacity to produce up to 90 cans per minute enabling several to be set up to increase output.

“Our production cubes can be easily integrated in your existing steel can production line,” says Brühlmeier. “Bodies are produced on your existing welder and with a new set of tools your presses will form the new geometry of tops and bottoms.”

With five weeks to the opening of Cannex & Fillex, the number of companies exhibiting has reached 125, with more still to come. Latest companies to book booths include Dow Chemical and Biagosch & Brandau. The show is already 15 percent larger in booking space than the last Cannex to be held, in 2013 at Atlanta.

Cannex and Fillex de las Americas will take place in the Colorado Convention Center from 27-29 April, with The Canmaker Technical Conference running alongside the show in the same building on the mornings of 28-29 April.

The two events, billed as The World Canmaking Congress, follow a highly-successful series of shows, the most recent of which was held last year in China.

As is usual, entry to the Cannex & Fillex is free to pre-registered canmakers, fillers, metal decorators and to others who are actively involved in the manufacture or use of metal packaging. The show will feature global exhibitors from the Americas, Asia, Europe and Australasia. There will also be a special display of the most recent winners from The Canmaker magazine Cans of the Year Awards.

The Canmaker Technical Conference will focus on recent developments in the metal packaging industry, notably tooling design for the lightweighting of cans, performance developments with the latest BPA-NI coatings, vision systems to meet the labelling standards of brand owners, lower environmental impact coatings for monobloc aerosol cans, the minimising of air consumption in plants and the latest developments in two-piece and three-piece canmaking technology.

Registration for The Canmaker Technical Conference is separate from the show.

Register now for The Canmaker Summit 2022

The Canmaker Summit rescheduled for October 2021

Ardagh wins The Canmaker’s 2019 Can of the Year Award

Register now for The Canmaker Summit 2022

Manufacturers and consumers drive up Brazil’s steel can recycling rate